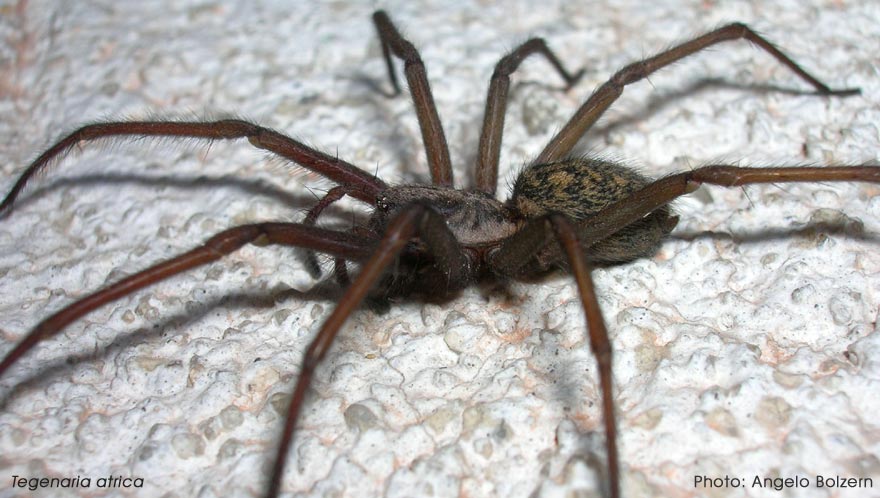 Who doesn’t know them: large, dark, hairy spiders which appear in the bathtub or washbasin and who – thanks mostly to their large size and their strong contrast against the chalk-white background – provoke a strong reaction among humans. These are mostly house spiders, which are neither poisonous nor dangerous. Nevertheless, spotting exactly this creature is the thing that most harms the relationship between spiders and many people.

In 2008 the house spider (genus Tegenaria) has been chosen as the spider of the year. The jury could think of no better candidate to draw attention to the typically irrational fears which people hold against eight-legged animals. With this action, arachnologists want to promote an interest, or at least an understanding, of the natural world around us. For the third time the spider of the year has been chosen on a Europe-wide basis. Since not every species of Tegenaria occurs in every European country, a new feature has been introduced here and the entire genus across Europe will be the focus of our publicity drive. Each country will then choose a local representative species.

About 70, of the 130 species known world-wide, can be found in Europe. In the countryside their webs are built under stones, in hollow logs, under tree roots or in thick vegetation. But in areas of human settlement they gratefully occupy numerous alternative habitats.

House spiders of the genus Tegenaria build sheet-like webs, which in buildings are typically found in the corners of rooms. This is the easiest place for the spider to span its web across, and then to position its funnel-like retreat. Here, immobile, these nocturnal spiders spend most of their time. The retreat is built somewhere protected and free from rainfall. The rest of the web can, by contrast, extend well into the room.

If an insect or woodlouse falls into its lair, the spider detects the vibrations it causes in the sheet-like part of the web. Fast as lightning, it runs up to the prey and bites it, injecting venom in the process. Smaller prey animals are simply carried into the tubular retreat. If the victim resists strongly, Tegenaria typically returns to its retreat and waits for the venom to take effect. With repeated bites even large prey can eventually be subdued, and afterwards consumed in the safety of the retreat.

These spider’s leg-span is impressive. Long-legged males can reach over 10 cm; which does little to convince people who know no better that the spider is not in fact dangerous. By testing bites on themselves, scientists have shown that even if a house spider manages to bite through the skin, the venom has no noticeable effect. Mostly it is the bite itself, like a pin-prick, which is noticed. Worth mentioning is the fact that even experts need a lot of skill and patience in order to encourage the spider to bite them, without harming the spider in the process. So if you take the spider out the bath – either with your hand or with a glass and a beer mat – and set it free, there is no danger whatsoever. In fact you have not only saved the spider from certain death, you have come into contact with a real part of your local natural environment.

Information in other languages